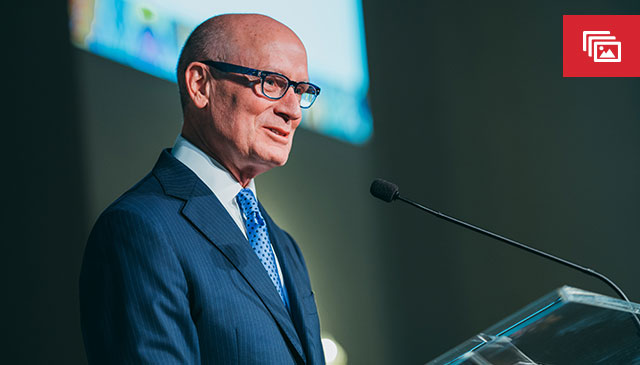 In 1996, Physician-in-Chief Dr. Mark W. Kline made a trip to Romania that changed his life and subsequently the lives of hundreds of thousands of children and women across the globe.

While there on a fact-finding mission after the Eastern European country’s inhumane treatment of orphans came to the world’s attention, Kline saw children ravaged by HIV/AIDS because they didn’t have access to the life-saving medication that was readily available in the United States.

The images haunted Kline, who on his flight back to Houston roughly outlined how Baylor could intervene to help children neglected by the global public health community. Twenty years later, Baylor College of Medicine International Pediatric AIDS Initiative (BIPAI) at Texas Children’s Hospital is one of the largest global maternal and child health programs in the world.

Providing care and treatment to nearly 300,000 children, BIPAI has established public-private partnerships in 10 countries across sub-Saharan Africa as well as Latin America and Romania. These partnerships now extend beyond the scope of HIV/AIDS and tackle other conditions in the developing world such as cancer, tuberculosis, malaria, sickle cell and malnutrition.

“BIPAI and its partnership with Texas Children’s has touched so many lives, and we owe it all to Dr. Kline’s vision and leadership,” said Texas Children’s President and Chief Operating Officer Mark A. Wallace. “If it weren’t for him, BIPAI wouldn’t exist.”

BIPAI’s 20 years of success were celebrated September 29 at the fund-raising event “Through the Lens.” Presented by Chevron, the event honored Kline and featured the work of Smiley Pool, a Pulitzer Prize winning photojournalist who has captured BIPAI’s life-changing work for the past two decades.

The almost 300 people who attended the event at The Revaire experienced a visual journey through Poole’s photographs from the diverse regions where BIPAI is bringing health and healing to those in need of care. Most of the photos had never been seen before and told a story of challenge, hope, triumph and connection.

“It has been an honor and a privilege to be able to document the journey of BIPAI and Texas Children’s across the globe,” Pool said. “I hope the stories of the people I have photographed will continue to inspire others to move this effort forward.”

In addition to Pool’s photographs, the event featured a World Market sponsored by AbbVie. The market was filled with goods made by the BIPAI Teen Club and were available for purchase. The event’s globally-inspired cuisine included passed hors d’oeuvres, along with six food stations where empanadas were served to honor Argentina, Romanian garlic sausage was enjoyed, and guests were treated to three variations of ceviche as a tribute to the culture of Columbia.

“Chevron is proud to be part of a partnership that has saved so many lives,” said Clay Neff, president of Chevron’s Africa and Latin America Exploration and Production. “We are extremely appreciative of Dr. Kline’s leadership and look forward to continuing to work side-by-side.”

When Kline took the stage, he humbly thanked several people in the room and appreciated gratefulness for being given the opportunity to help children and women in such need.

“This work is incredibly gratifying,” he said. “I’ve done it for the past 20 years because it’s my passion. I’m truly doing what I love.”

For more information about BIPAI, visit bipai.org. To read more about Texas Children’s Global Health Program, click here. To support these efforts across the global, click here. “Through The Lens” raised more than $400,000 toward BIPAI’s mission.