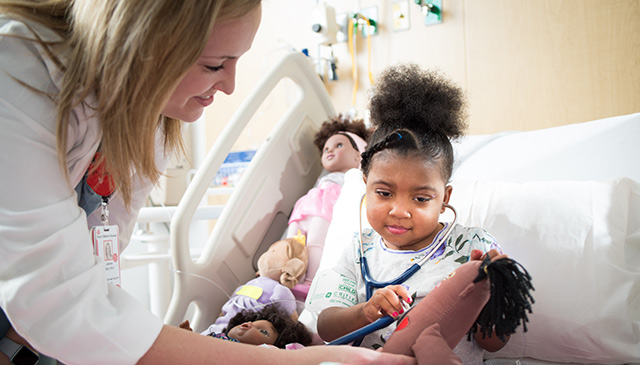 It’s Heart Month, which is always a special time at Texas Children’s as we celebrate our patients and families, the care we provide at our No. 1-ranked Heart Center and our many milestones. This year, we’re kicking off Heart Month celebrating yet another momentous first.

A team of experts at Texas Children’s Heart Center®, led by congenital heart surgeon Dr. Iki Adachi, became the first in the United States – and only the second in the world – to implant the Jarvik 2015 ventricular assist device (VAD), a groundbreaking new technology Adachi helped develop.

“Dr. Adachi is truly a pioneer and a world-renowned authority on mechanical heart support,” said Dr. Christopher Caldarone, Texas Children’s chief of Congenital Heart Surgery. “His work in the development of the Jarvik 2015 VAD has been tremendous and is a great example of the power of Texas Children’s in bringing new technologies to benefit our patients.”

For patients with heart failure, a VAD can buy valuable time until they match an organ. In some rare cases, a VAD can be used as a permanent therapy for heart failure or can even improve heart function to such a degree that it makes a transplant unnecessary. VADs can either simulate heart function with pulsing action or allow a continuous stream of blood to flow through the heart. Continuous-flow VADs tend to be smaller and quieter but also more durable, and in recent years have yielded improved results in adult heart failure patients.

The Jarvik 2015 is the first and only implantable continuous-flow VAD designed specifically for small children. Development took more than a decade and was not without setbacks. After the previous prototype failed to gain FDA approval, the team of engineers enlisted Adachi to assist with crucial design modifications to the VAD’s pump while keeping the size of the device small – about the size of a AA battery. Following extensive testing in the Texas Medical Center, the FDA approved the Jarvik 2015 for clinical trial.

A chance at life

One of the most significant benefits of this new technology is that it allows the patient to become stronger, making them a better candidate for transplant. Such was the case with Katlyen Hickman.

You would never know by looking at Katlyen today that the smiling, energetic four-year-old needed multiple surgeries to save her life only a few months ago. She was born with complex congenital heart disease, including ventricular septal defects and small left heart structures, and despite numerous procedures and surgeries during her first years of life, her condition was rapidly deteriorating this past fall.

“It was clear she was moving in the direction of needing heart transplantation,” Adachi said. “She was admitted to the ICU and her heart was just getting worse and worse.”

Though the Jarvik 2015 had been cleared for clinical trials, it hadn’t been approved for commercialization. But because Katlyen’s case was so dire, and because she was too small to receive an adult-size VAD, Adachi and Texas Children’s were able to obtain expanded access from the FDA to implant the device. The fact that the team was already very familiar with the Jarvik 2015, following their extensive laboratory testing, helped facilitate the process with the FDA.

The results couldn’t have been better. Not only did the device keep Katlyen alive, but it also improved her blood flow, which helped her organs recover. This success paved the way for the next critical step in her journey – a heart transplant, which she received on November 23, 2018. It was the day after Thanksgiving. Only a month later she was discharged and spent Christmas at home with her family.

Adachi anticipates the Jarvik 2015 will do well in the upcoming multi-institutional clinical trial and hopes its availability may further accelerate the trend toward the use continuous-flow devices in children.

“Pediatric VAD support will continue to evolve as the pediatric mechanical circulatory support area matures,” he said. “The popularization of continuous-flow devices could be a landmark event that represents a paradigm shift in the field. And Texas Children continues to lead that shift.”