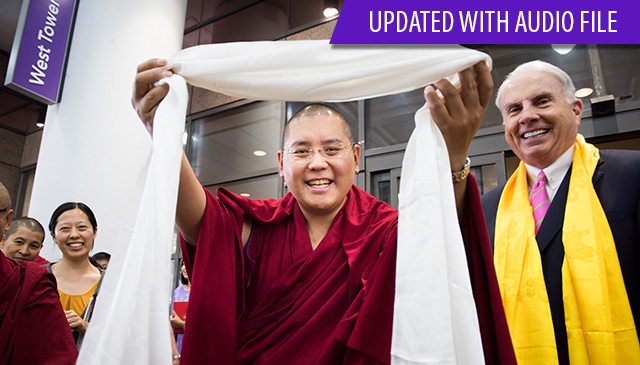 On July 26, employees at Texas Children’s medical center campus received a masterclass on cultivating a life full of love and compassion from an expert on the subject – His Eminence the 7th Ling Rinpoche, an esteemed teacher of dharma (basic principles of existence) in the Tibetan Buddhist tradition.

Click here to listen to the talk given by His Eminence the 7th Ling Rinpoche.

It was an event years in the making. In 2017, Physician-in-Chief Dr. Mark W. Kline invited His Holiness the 14th Dalai Lama to speak at Texas Children’s as part of an upcoming United States tour that would include engagements in Houston. However, due to illness, His Holiness the Dalai Lama was unable to travel. Instead, he asked His Eminence to tour on his behalf – including a specially requested stop at Texas Children’s.

“Texas Children’s Hospital practices compassion thousands of times each and every day,” said President and CEO Mark Wallace in his welcoming remarks. “We are deeply honored that His Eminence requested to include Texas Children’s in his plans for his first visit to Houston, and we are fortunate to hear his inspirational words on compassion.”

The visit to Texas Children’s was part of a full schedule of private lectures and public talks for audiences at the Houston Police Department, NASA Johnson Space Center, VIET TV, Unity of Houston and other locations, and was coordinated by Texas Children’s Patient and Family Services in collaboration with the Drepung Loseling Institute of Texas, a center dedicated to the study and preservation of the Tibetan Buddhist tradition of wisdom and compassion.

“Healing is not just about physical medicine; it also includes a spiritual component,” said Director of Clinical Support Services Michelle Lawson. “Many families find comfort and healing on a spiritual level and lean on their faith traditions. At Texas Children’s, we value the diversity found in all cultures and religions. His Eminence’s presence provides an opportunity for our employees, patients and families to broaden their perspectives regarding healing practices and beliefs.”

Through an interpreter, His Eminence spoke to an audience of executive and clinical leadership, staff, and employees about cultivating love and compassion in daily life. He explained that by working in a profession where the goal was to help others health care workers were already engaged in meaningful living. However, he cautioned that many of the challenges health care employees face – such as physical, mental and emotional exhaustion – can cause them to lose hope when trying to develop an attitude of love and compassion. To meet those kinds of challenges, His Eminence told the audience that people must actively build a sense of connection to every person with whom they come into contact, so that everyone becomes equal to oneself. By doing so, a person becomes more invested in others, and it becomes a moral imperative, even an obligation, to accept responsibility for their happiness and wellbeing. Helping others, he concluded, was the purpose of a meaningful life.

During a short question-and-answer session, His Eminence fielded questions about Buddhism, meditation and dharmic teachings from audience members, including Kline, who asked what people could to do achieve personal peace.

The answer: To reduce a selfish attitude and not focus on obtaining selfish desires, the pursuit of which can lead to anxiety, anger and even poor health. Peace, His Eminence said, was obtained by cultivating an attitude to help others.

Following the Q&A, His Eminence led the audience through a guided meditation, after which Texas Children’s patient Leyna Le presented him with two copies of “The Art of Texas Children’s” – one for himself and one for His Holiness the Dalai Lama. The book showcases original artwork created by Texas Children’s patients over the years. His Eminence then toured parts of Lester and Sue Smith Legacy Tower and blessed patients and their families in the intensive care unit. To conclude the visit, a small service of prayer and blessing was held in the Children’s Chapel.

“Texas Children’s has become the great organization it is because family-centered care is at the core of our values,” said Tom Sharon, assistant director of Spiritual Care. “But today we’ve been reminded just how important it is to strive to meet our patients’ and families’ emotional and spiritual needs with the same commitment to excellence our experts do for their physical wellbeing.”

Learn more about the resources and programs available at Texas Children’s through Patient and Family Services.

His Eminence joined Drepung Monastic University in southern India in 1990, where his enrollment was celebrated with large religious ceremonies. He began his monastic studies at Drepung at the age of 10 and engaged in rigorous religious study and spiritual training under the special care and guidance of His Holiness the Dalai Lama. His Eminence completed all five Geshe Studies subjects (Logic, Perfection of Wisdom, Middle Way, Higher Knowledge and Monastic Discipline) and received his Geshe degree in November 2016. He then enrolled at Gyuto Tantric College in Dharamsala, India in April 2017 for a year of tantric studies that traditionally follows the completion of a Geshe degree.

His Eminence organized His Holiness the Dalai Lama’s historic Eighteen Jangchup Lamrim Commentaries, teachings on the classic Stages of the Path to Enlightenment. They were held at Sera, Drepung, Ganden and Tashi Lhunpo monasteries between 2012 and 2015 and attended each year by approximately 40,000 people from nearly 70 countries.

Since 2004, His Eminence has also participated in the Mind and Life Institute conferences held in India between His Holiness the Dalai Lama and scientists on a variety of topics, such as physics, neuroplasticity and destructive emotions.

The Drepung Loseling Institute of Texas was established in 2015 as one of the North American Seats of the Drepung Loseling Monastery in India and founded by His Eminence Gala Tulku Rinpoche with advice and blessing from His Holiness the 103rd Gaden Tripa Choeje Lobsang Tenzin Rinpoche and the generous support of Vietnamese devotees.

The primary goal of the Institute is to carry on the legacy of the Drepung Loseling Monastery. With the patronage of His Holiness the Dalai Lama, the Institute is dedicated to the study and preservation of the Tibetan Buddhist tradition of wisdom and compassion. It is a center for the cultivation of both heart and intellect and provides a sanctuary for the nurture of inner peace and kindness, community understanding, and global healing.