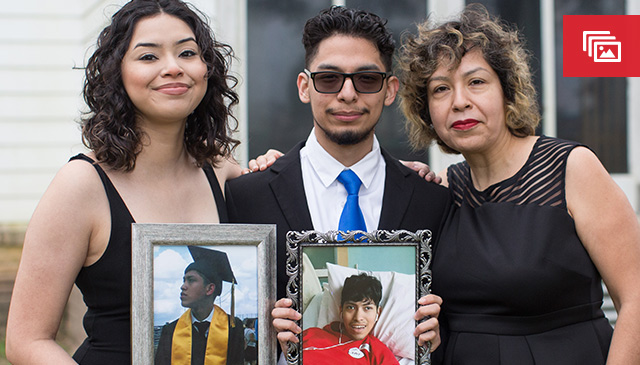 Although great strides have been made in the battle against pediatric cancer, some children still do not survive. When this occurs, Texas Children’s does its best to envelop families with love, support and knowledge on how they can cope with such a profound loss.

One such program offered to bereaved families by Texas Children’s Cancer Center is the Retreat for Renewal. The weekend retreat is held at Camp for All in Burton, TX and features fun activities, as well as therapeutic breakout sessions for reflection and expression.

“Retreat for Renewal is a safe space where families can express their feelings and meet other people who are going through similar situations,” said Nicolle Bengtson, a Child Life Specialist involved in the program. “The experience really allows these families to bond and open up about their individual experiences.”

Funded by the Cancer Center and generous donors, Retreat for Renewal has been offered for almost a decade. However, the retreat primarily served English speaking families. This year Retiro de Renovación had its inaugural year. This retreat was created for Spanish speaking families.

Attended by eight families, Retiro de Renovación was held in March and included a combination of fun camp activities, and therapeutic breakout sessions. Bengtson and Child Life Specialist Alyssa DeMoss organized the retreat after experiencing the continued success of the Retreat of Renewal and identifying an unmet need for additional emotional support for the Cancer Center’s bereaved Spanish speaking families, in the language that felt the most comforting to them.

“We are excited to offer even more families this level of bereavement support,” DeMoss said. “It was really beautiful to see the parents and siblings at the retreat connect, and watch as the families created a new and meaningful support network.”

Many of the families expressed how much the retreat meant to them in written comments. One family wrote that it was nice to be able to share their stories with other families going through the same thing. Another family mentioned meeting others who were going through a similar situation made them feel less alone.

“It was nice to take time to remember our loved ones,” the family member said.

The Spanish-speaking retreat – Retiro de Renovaciόn – was funded by the Texas 4000 for Cancer cycling team, which rode 4,000-plus miles from Austin, TX to Anchorage, Alaska, in an effort to raise money for cancer-related programs and efforts.

The group donated $25,000 of their proceeds to Texas Children’s for the Retiro de Renovación. The Cancer Center is grateful for the donation and hopes to be able to hold future Spanish-speaking retreats.