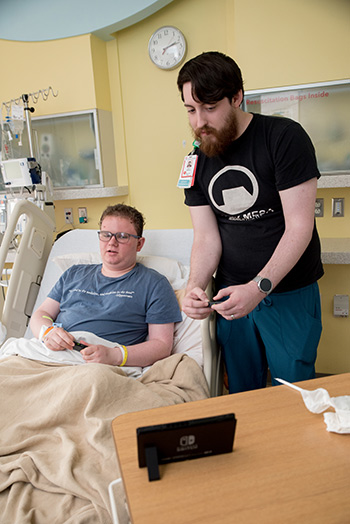 The committed and talented individuals of Texas Children’s Child Life Department provide an invaluable service for our patients and their families, helping alleviate stress and anxiety during some of life’s most difficult moments.

This past fall, the Child Life team welcomed a new member, Marty McMahon, in the brand-new role of gaming activity coordinator. In this new position, McMahon is already creating exciting ways to engage patients using the power of technology.

“Technology is such a big part of children’s lives today, and we wanted to figure out how we could use it to help reduce anxiety and to promote learning and interaction for our patients,” said Diane Kaulen, manager of Child Life at Texas Children’s. “I had learned about gaming activity coordinators and similar positions by networking with other organizations and began exploring the possible therapeutic benefits of technology and gaming.”

Kaulen’s search led her to Child’s Play, Inc., a game industry charity dedicated to improving the lives of children with toys and games in a network of over 100 hospitals worldwide, as well as domestic abuse shelters and advocacy centers. She submitted a proposal, and though Child’s Play typically only allocates funding for one year, Texas Children’s was awarded a two-year grant this past fall to create the new position.

It was a chance of a lifetime for McMahon. He had already turned a lifelong passion for creating art and a love of video games into a degree in Game Art and Design from the Art Institute of Pittsburgh. After earning his degree, he began thinking about using his background and passions to help children and spent most of his earlier career in educational technology. Then he heard about the opportunity at Texas Children’s.

“For years I’d been attending gaming conventions where I encountered Child’s Play,” McMahon said. “I was so impressed by their passion and the great work they do that when I heard about the position at Texas Children’s, I knew I had to apply.”

In his role, McMahon has a wide range of responsibilities. In addition to individual in-room sessions with patients, he also assists other activity coordinators and child life specialists in West Tower’s Child Life Zone, and develops programming that encourages socialization and engagement with other children.

In addition to traditional video games, McMahon helps facilitate Child Life’s expanded use of technological resources that can help promote a sense of normalcy for patients during their time at Texas Children’s. These resources include virtual and augmented reality, 3-D printing, coding, and iPad and app engagement.

One example is how McMahon uses teleconferencing robots to allow patients who can’t leave their rooms to virtually attend Child Life events, such as our Easter Egg hunt or Camp for All.

And because these activities are included in patients’ treatment programs, all of McMahon’s patient encounters are recorded in the EPIC system used by Texas Children’s physicians, nurses and other members of the clinical care team.

Just in time for summer, McMahon has also developed and is currently piloting the 2nd Player Gaming Volunteer Program, which helps support larger gaming events at the hospital and allows volunteers to engage with patients through gaming and technology.

“The Child Life team is a dream to work with,” said McMahon. “Between all of our different specialties, from our librarians to our animal-assisted therapy coordinators and everyone in between, we have so many unique ways to create great experiences for our patients and to support them throughout their care journey.”

Perhaps unsurprisingly, McMahon’s work has already proved to be a huge hit with Texas Children’s patients – like 17-year-old Joel Couch.

“Sitting in the hospital, you can get down,” said Joel. “When Marty first visited me with games, even though I’m not usually a big gamer, it made me feel uplifted and positive to have that social interaction and someone who I can talk to and who I know will listen to me share what’s on my heart.”

When Joel was 3, his parents noticed he was tripping and dropping things more. Those behaviors quickly gave way to more alarming concerns: Joel’s face was sagging, he was dragging his right leg, and he was unable to use his right hand. Doctors in the Couch family’s home state of North Carolina diagnosed him with pilocytic astrocytoma, a type of slow-growing brain tumor. Though benign, Joel’s tumor was on his brain stem, meaning it couldn’t be entirely removed. An initial procedure soon after diagnosis helped reduce the size of the tumor. Another surgery was required at age 9. But when Joel was 12 the tumor came back with a vengeance. His parents, desperate for help, turned to Texas Children’s.

Since he began receiving care at Texas Children’s, Joel has undergone 13 surgeries, all with Dr. Daniel Curry, director of Functional Neurosurgery and Epilepsy Surgery. He has also received care from the experts in Endocrinology, Physical Therapy, Occupational Therapy, Speech Therapy, Ophthalmology – and, of course, Child Life.

“Texas Children’s has definitely become our home away from home, but the connections we’ve made here have meant so much to us,” said Tonya Couch, Joel’s mother. “Despite everything we’ve been through, Dr. Curry and his team and all the other caregivers who help Joel, and people from Child Life, like Marty, have all made such a difference in our lives.”

For Joel, what was even more special than video games was the opportunity to see a 3-D printer in action.

“I’d heard about them before, but for many reasons never thought I’d be able to see how a 3-D printer works, much less have something printed for me,” he said.

Thanks to Marty, Joel now has a collection of 3-D printed items – including the Eiffel Tower and the Houston skyline – sitting on the window sill of his family’s apartment here in Houston.

“Working with Joel has been an amazing experience for me,” said McMahon. “He is so appreciative of everything we do in Child Life. I’m glad we get to share those experiences and value that time together.”

Learn more about the outstanding work done each and every day by Texas Children’s Child Life Department.