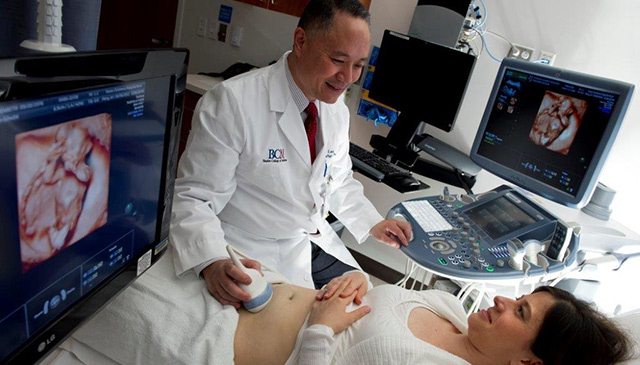 Fetal growth restriction is a major public health concern that can lead to short-term complications for the newborn and possibly the development of health problems later in life. Researchers at Texas Children’s Hospital and Baylor College of Medicine were recently awarded $3.2 million by the National Institutes of Health to develop an improved way to assess umbilical venous blood flow using 3D and Doppler ultrasound techniques. They aim to improve the detection and monitoring of small fetuses.

Fetal growth restriction increases the risk of stillbirth, problems during the newborn period, and neonatal death. Affected fetuses also are predisposed to developmental delay as well as the occurrence of adult diseases such as obesity, type 2 diabetes mellitus, coronary artery disease, and stroke.

“Our research team will initially validate the accuracy and reproducibility of new 3D volume flow measurements and then develop corresponding reference ranges in normal pregnancies,” said Dr. Wesley Lee, co-director of Texas Children’s Fetal Center and professor of obstetrics and gynecology at Baylor. “Detailed observations of fetal growth, heart function, and circulatory changes will be made in over 1,000 small fetuses with estimated weights below the tenth percentile. The results will be correlated with pregnancy outcomes to identify prenatal predictors of clinical problems in newborns.”

According to Lee, identifying the most vulnerable, small fetuses may not only influence their neonatal course, but could also have lasting impact on long-term health consequences during adult life. Researchers hope to develop 3D umbilical venous flow as a reproducible circulatory measurement that is accurate and clinically applicable, even during early pregnancy.

The five-year investigation is a collaboration between Texas Children’s Hospital, Baylor College of Medicine, University of Michigan, Perinatology Research Branch of the Eunice Kennedy Shriver National Institute of Child Health and Human Development and GE Healthcare.