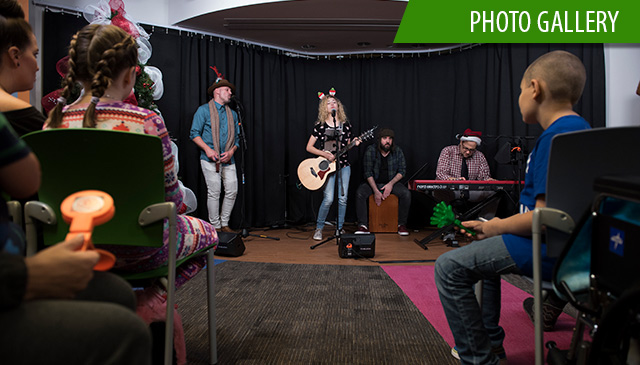 Music is not only food for the soul, but also medicine for the body when it comes to health institutions like Texas Children’s. George Robinson, the grandson of Lillie and Jim Abercrombie, has partnered with Michael Clay, Executive Director and Co-Founder of Texas Music Project, to donate a $75,000 gift from the George A. Robinson IV Foundation.

It all started when Clay realized his family ties with the Abercrombies. They were Texas Children’s first major benefactors, whose kindness and foresight helped create our nationally recognized hospital. With this in mind, he knew that reaching out to his family, whose history runs deep in the organization, would lead to a great partnership with his company. Texas Music Project is a program for students, schools, and communities, which partners with musicians to help guide students down their own unique musical paths.

“We’re a grassroots resource for the community and kids for music,” Clay said. “I’ve learned that music therapy crosses over from not just schools, but into hospitals as well.”

The money donated goes to the Child Life department’s music therapy program, to upgrade media technology. Music Therapy, Child Life Media Producer, Bio Med, IT and the Facilities Planning teams have all been working with the Texas Music Project for the past year to bring George’s vision to fruition. The upgrade includes new audio systems, lighting systems for the broadcast, and most importantly, portable capabilities.

The idea was to upgrade the audio system in a way that could be taken anywhere in the hospital. Along with the main system located in the Zone, the Child Life entertainment center for patients, there is a mobile studio that allows for an efficient assembly process so that video can be streamed lived from room-to-room, if necessary.

The last portion of this partnership consists of producing a regular concert for patients called Rockin’ Robinson. This will include different musicians performing live for patients, to entertain them and lift their spirits. With the portable technology upgrade, these shows can be produced regularly and live streamed on ZTV, an internal television channel, for patients who are not able to leave their room.

“I am really grateful for the Robinson’s gift towards the technology upgrade,” Child Life Media Producer, Ashby Gleditsch said. “I am excited about what we will be able to accomplish in the future with live programming.”

On December 12, Robinson and his daughter Blair Robinson, along with Clay and the Texas Music Project team came to the hospital to shoot the pilot of Rockin’ Robinson. Dozens of patients, their families, and employees gathered in The Zone, for a concert as Blair sang and played the acoustic guitar with her band.

Music therapy is a very important component when it comes to an individual’s recovery process, especially with children. This gift will not only ingrain a new activity into the Child Life program, but also ensure smiles on patient’s faces and music in their hearts.

“I’m so excited about putting these shows in the rooms for the kids to see,” Robinson said. “My goal is to get this into all of the Texas Children’s campuses so that we can reach as many children as possible with a few songs.”