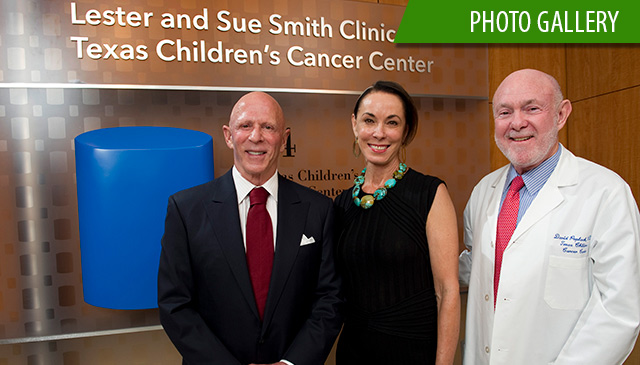 In May 2019, the Texas Children’s family will celebrate the one-year anniversary of the opening of Lester and Sue Smith Legacy Tower, one of the greatest achievements in the hospital’s history. We will also pause to remember the life, memory and faithful generosity of the man whose name the tower bears.

“I was honored to call Lester Smith my friend and I am deeply saddened by the news of his passing,” said Texas Children’s President and CEO Mark Wallace. “He lived his life honorably, and among his greatest joys was his dedication to the service of others. Texas Children’s was lucky enough to be a beneficiary of his unwavering generosity over the years and his commitment to our patients and their families, notably our Cancer Center, was unmatched.”

A native of Wharton, Texas, Smith was a second-generation oil man – a wildcatter who made his mark on the industry, and his fortune, by taking chances others wouldn’t when it came to oil drilling exploration. In 1986, he started Houston-based Smith Energy Company, a provider of oil and gas exploration and production of oil and gas reserves, which he built into a successful multi-state operation. In the 90s, while on a scuba trip to Venezuela, he met the love his life, Sue. The two shared many passions, including competitive ballroom dancing, for which they won two U.S. championships

But following a series of health-related issues, Smith found his highest calling. Drawing from a place of gratitude for the life-saving care he received during battles with cancer, Smith and Sue dedicated more than $150 million to support research at numerous institutions, including Texas Children’s, Baylor College of Medicine and Harris Health System.

A statement from the Lester and Sue Smith Foundation released after his passing said, “his core philosophy, ‘to whom much is given, much is expected,’ drove his life-long passion for giving, touching millions of lives, leaving an indelible mark on our city and world.”

But nowhere will Smith’s legacy and passion for giving be felt more than here at Texas Children’s.

In two fundraising events in 2011 and 2012, Smith and wife, Sue, helped generate more than $41 million in donations to Texas Children’s Cancer Center, with more than $21 million directly donated by The Lester and Sue Smith Foundation.

The 2011 “Evening with a Legend” event honored actor Robert Duvall and showcased a live, on-stage interview by CBS veteran news anchor Bob Schieffer. In February 2012, the “Evening with Disco Legends” event featured performances by disco greats Gloria Gaynor, The Pointer Sisters and Nile Rodgers, and drew over 1,100 supporters – the largest single-evening fundraiser in Houston’s history at the time. By underwriting the event, the Smiths enabled 100 percent of the proceeds to directly fund research at Cancer Center.

“We are deeply saddened by the loss of Lester Smith, whose efforts have helped advance research and care for children with cancer and blood disorders,” said Director of Texas Children’s Cancer and Hematology Centers Dr. Susan Blaney. “Few have had such a transformational impact on our efforts at Texas Children’s Cancer and Hematology Centers to lead the way in research and care of childhood cancer.”

But it seemed Smith, who was fiercely competitive, wanted an opportunity to outdo himself.

In September 2018, the Smiths chaired the “Legacy of Motown” gala in support of Legacy Tower – Texas Children’s new home for heart, intensive care and surgery – and to support patient care and research at the Cancer Center. The event, underwritten by the Lester and Sue Smith Foundation, raised a record $83,373,119, making it one of the largest single-night fundraisers in the state’s history. The Smith’s personal contribution was an astonishing $50 million.

In honor of that transformational give, Texas Children’s renamed the state-of-the-art, 640,000-square-foot expansion Lester and Sue Smith Legacy Tower.

“Giving to others is our guiding philosophy,” said Smith at the time of the event. “There is nothing more precious than a child, and we hope this gift will help support the incomparable patient care for which the hospital is known. It is truly our honor to leave a legacy of support for generations to come at Texas Children’s.”

The entire Texas Children’s family will forever be grateful for that selflessness and unfailing support.

“Lester’s incredible legacy will live on in the medical advancements, state-of-the-art care and infinite hope for our patients in the tower which now bears his name – Texas Children’s Lester and Sue Smith Legacy Tower,” said Wallace. “My thoughts and heartfelt condolences are with his biggest fan, Sue, as well as his children, Stuart and his wife, Limor, and Shelly and her husband, Brian.”