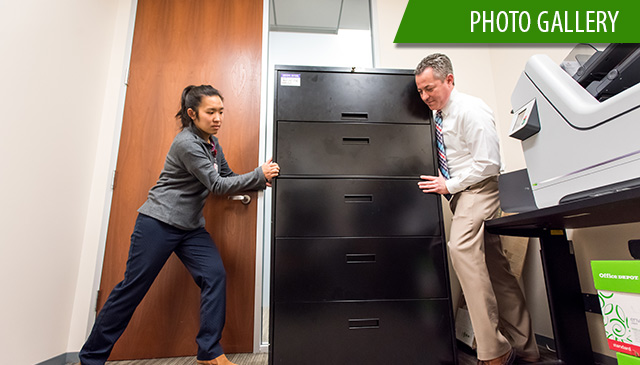 When opportunities arise, Texas Children’s Emergency Management plans functional active shooter exercises on our campuses. Thanks to the leadership and staff of the Texas Children’s Health Plan, or the first time on February 27, the exercise was geared toward those who work in an office environment rather than a clinical space.

The purpose of these exercises is to test Texas Children’s emergency notification procedures, staff training for response to an active shooter (Run, Hide, Fight), and to give our law enforcement partners a chance to practice their tactical response to an active shooter. Holding this training in an administrative rather than a clinical setting provided an excellent opportunity to test the “Run, Hide, Fight” training and a different environment.

The most important aspect of the exercise is the difference in an administrative setting versus a healthcare setting. Hospitals have multiple patient rooms and storage rooms for other medical purposes, whereas, in most office buildings there are large open areas that have cubicles. When the staff practice the “Run, Hide, Fight” method, most people’s first thought is to hide under a cubicle desk.

“That is not the safest place during an active shooter situation,” manager of Texas Children’s Emergency Management Aaron Freedkin said. “They need to find another place, either leave the floor or find a room that they can lock or block the door with furniture. That’s preferable to just hiding under a desk.”

The exercise included 175 participants, 14 logistical volunteers, 32 observers and 48 law enforcement officers such as: UT Police, Bellaire Police, Houston Police Department, Precinct 5 Constables Office, and Pasadena Police Department SWAT. Having multiple agencies involved in simulating an active shooter incident response creates an environment that is as realistic as possible and allows law enforcement agencies to practice their skills in a new environment. A secondary benefit is having the opportunity to train in the office setting, which would be valuable in the event of a real active shooter incident. It is a chance for them to train together with other agencies and get exposed to different training aspects that ultimately have the same basic goals and mission.

“We are excited to partner with these law enforcement agencies,” Freedkin said. “They get many opportunities to practice in empty buildings with law enforcement participants. This exercise will give them all a chance to practice their building clearing and searches with the unpredictability of non-law enforcement officers playing the role of victims and so there is definitely something in it for everyone participating.”

After the participants arrived, they were put through a safety briefing with Texas Children’s Hospital Emergency Management, followed by further orientation with The University of Texas Police Department, and “Run, Hide, Fight” training provided by Texas Children’s Security. During these exercises blank ammunition was used to simulate gunfire to increase realism while maintaining safety.

Law enforcement was staged on the 13th floor and the exercise began as they proceeded down the stairwell. Meanwhile, there is a person on the 12th floor acting as the aggressor toward employees. The challenge then comes as the aggressor engages in a discussion with the employee that may result in them not thinking immediately about, “Run, Hide, Fight.” After the exercise is reset and begins a second time, there is quicker movement of people because they have had time to immediately think about it and learn from their initial mistakes.

“It is always interesting to observe an exercise such as this because people react in unexpected ways such as seeking shelter and protection in places that are not ideal,” Freedkin said. “That is one of the reasons we conduct this training so that people have an opportunity in advance to consider their training and what their reaction should be.”

There were three sessions and all were structured the same way. Between the first evolution and second evolution of each session, a portion of the scenario changed. A debrief discussion was later held and everyone was able to reflect on their reactions.

“The exercise went extremely well and was well received by the exercise participants and senior leadership who were present,” Freedkin said. “For future exercises, we are working with our law enforcement partners to add additional elements of realism to the exercise while still maintaining the safety of our participants.”

The Emergency Management Team looks forward to providing more trainings geared toward the administration staff throughout the system, and wants people to know if an opportunity comes up to participate in an active shooter exercise like this, staff should take advantage of it. The more realistic your training experience the better you’re going to react in an actual incident.