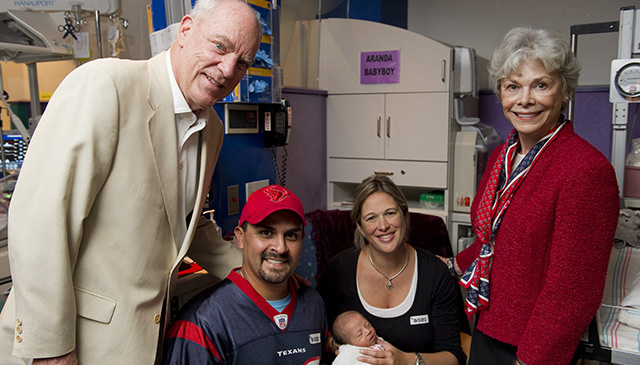 When the Houston Texans took the field on Monday night, November 26, they were out to win one in honor of a true Houston legend – Texans owner and philanthropist Bob McNair, who passed away on November 23 at the age of 81.

“I was proud to call Bob my friend, and he was such an important part of the Texas Children’s family,” said President and CEO Mark Wallace. “Because of his generous support, Texas Children’s has become one of the preeminent destinations in the world for pediatric health care and women’s services. All of us at Texas Children’s are sending positive thoughts and uplifting prayers to the entire McNair family during this difficult time.”

McNair and his wife, Janice, first called Houston home in 1960, just six years after Texas Children’s Hospital opened its doors. Initially unlucky in business, McNair finally found success when he started Cogen Technologies, which went on to become the largest privately owned cogeneration (an efficient form of power generation that produces electricity and heat at the same time) company in the world.

Of course, many will remember McNair as the man who tirelessly championed the cause to bring football back to Houston after the Oilers left in 1996. He was devoted to Texans fans and desperately wanted to bring a championship home for the people of Houston.

The same determination McNair put into building the Texans into a great team he also put into helping make a difference in the lives of others.

For nearly six decades, the McNairs used their resources as a force for positive change in Houston and across the United States. Through The Robert and Janice McNair Foundation, they gave more than half a billion dollars to support education, advance medical research, train future business leaders, and encourage civic engagement. They set up scholarship programs at several universities, including Rice in Houston, that have made it possible for countless young people to attend college and earn their degrees.

Texas Children’s and our academic partner, Baylor College of Medicine, owe so much to McNair’s legacy and generosity.

The McNair Medical Institute has provided crucial funding that has supported the development of several research initiatives, and has also enabled Texas Children’s and Baylor to recruit some of the most brilliant minds in health care and medical research through the McNair Scholar program. And Texas Children’s partnership with the Texans has helped us encourage children throughout Greater Houston to make healthy choices and inspired them through community activities and school events throughout the year, like our upcoming mini PLAY 60 event.

These are just a few examples of the selflessness McNair exhibited on a daily basis. His towering legacy will live on for years to come in Houston, in Texans football and in the care that we provide at Texas Children’s.