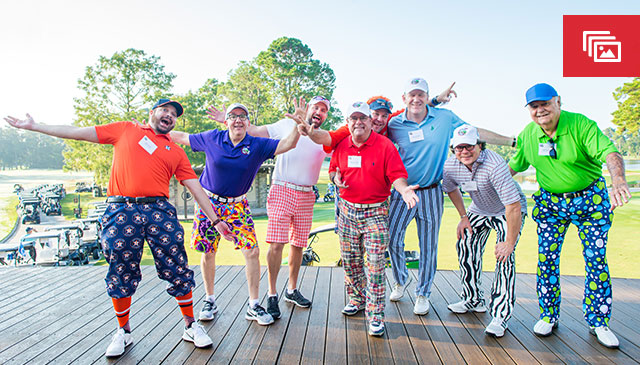 More than 300 golfers wore their baddest pants, played their best golf and raised more than $440,000 for Texas Children’s Newborn Center at the Clubs of Kingwood on October 2.

The RBC Wealth Management Bad Pants Open, an annual golf tournament now in its 22nd year, has raised more than $7 million over the past two decades to support continued innovation and excellence in the research, treatment and care of critically-ill and premature infants in the neonatal intensive care unit (NICU) at Texas Children’s Hospital. Tournament proceeds fund nurse training and education and hands-on bereavement care programs and ensure that each family’s most urgent needs are met – from covering parking costs to providing meals, transportation, car seats and more.

The event featured a post-play awards ceremony and dinner catered by A Fare Extraordinaire, where players were awarded plates painted by Texas Children’s patients for both the best golf scores and baddest pants.

Kelly Jett, a NICU nurse at Texas Children’s Hospital, was presented with the NICU Nurse of the Year award, a special recognition awarded at each tournament. Pearland residents Eva and Philip Quartey, parents of Blessing Quartey, who was born at 24 weeks gestation weighing just over a pound and received care in the NICU at Texas Children’s Pavilion for Women, were honored at the event as well. Eva gave an emotional speech about the doctors, nurses and other support staff that helped her family through their long NICU journey.

More than 2,500 critically-ill and premature infants receive essential care in Texas Children’s NICU each year, many of whom are born at nearby Houston-area hospitals. Texas Children’s is the nation’s largest NICU and one of only two Level IV NICUs in the greater Houston area. More information, including next year’s tournament date, will be available at www.badpantsopen.com.