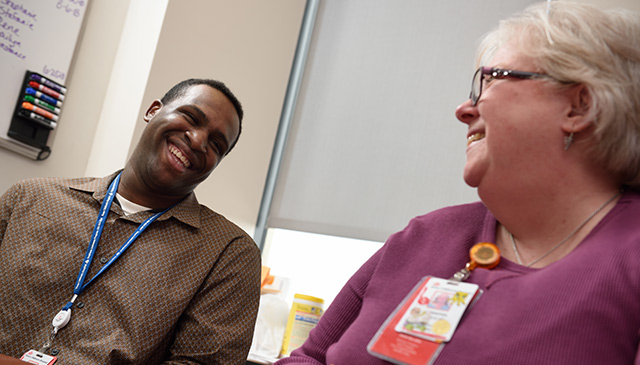 For Jarred Bolt, receiving a job offer near the end of his internship with Project Search at Texas Children’s Health Plan (TCHP) was as unexpected as it was exciting.

“When I received the great news from my job coach, I said, ‘This is impossible! How am I hired?’ And everyone cheered,” said Bolt, who’s now a claims and transactions entry clerk with the Health Plan.

Project Search, the program that brought Bolt and the Health Plan together, was launched in 1996 out of Cincinnati Children’s mission to help people with disabilities find employment opportunities. TCHP partners with Houston Independent School District (HISD) and the Texas Workforce Commission to place students with intellectual developmental disorders and other diagnoses in Project Search internships at the Health Plan. The program is in its third year at TCHP, and Bolt is their first internal hire.

“Jarred is just very personable,” said Health Plan Claims Administration Manager Jenni Aguilar. “He always speaks, and he always has a smile on his face. He’s just a good, smart young man, and he is a really good asset for our team.”

Throughout the duration of their year-long internships with Project Search, interns rotate to different departments where they learn various areas of the business, acquire new skills and meet new people. During Bolt’s final rotation, the Claims team started a big project that required all hands on deck. Although Bolt was interning in another department, the Project Search coaches suggested he be placed on the Claims project.

Bolt was a natural. He sped through data entries, and his work helped the team to push the project across the finish line. His dedication and willingness to step up caught the eye of Health Plan leaders, and he officially started as a full-time Claims employee in August.

For many of the interns, the skills they learn through Project Search are brand new. And typically by the end of the internships, they are able to apply their newly learned skills – like computer literacy and business etiquette – in future positions.

Bolt rides the Metro to work, he clocks in by 7 a.m., and he promptly starts checking off tasks. He prizes punctuality and pitching in where needed. Some of the skills he’s learned, in addition to vast computer know-how, include mailing handouts, distributing mail and scanning forms.

“The Project Search partnership is a strong example of one of the many ways Texas Children’s invests in building healthy communities,” said Dr. Heidi Schwarzwald, chief medical officer of pediatrics at Texas Children’s Health Plan.

To qualify as interns with Project Search, students must be 18 to 22 years old and meet certain requirements, such as having a high school diploma or GED. At the Health Plan, in addition to their internship rotations, they take classes from an HISD teacher once a week. The application process gets competitive, as there are only 10 spots available, but the Health Plan hopes to eventually increase capacity.

“This is a program that could successfully expand across the system, and I’d be happy to talk to anyone who would want to be an advocate for seeing it through,” Schwarzwald said. “The more all of us at Texas Children’s get involved in programs like Project Search, the greater the influence we can have on helping differently abled people thrive.”