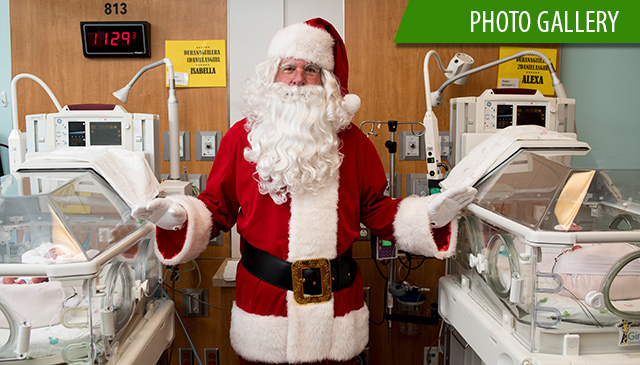 Santa Claus made his way to Texas Children’s Newborn Center last week to spread some holiday cheer – but he wasn’t the only one dressed up in red. Babies in the NICU at Texas Children’s Hospital Pavilion for Women and West Tower were dressed in their own tiny Santa hats and booties.

Vincent Michael Garza, born on December 6, was dressed in a green and white striped holiday-themed onsie when Santa walked in bellowing a spirited Ho, Ho, Ho! The days old infant gave Santa a quick newborn smile and then went peacefully back to sleep.

“I love this,” said Santa Claus, who has a personal connection to Texas Children’s – his own grandson spent over 100 days in the NICU when he was born. “It makes my day.”

Click here to watch a video of Santa visiting babies in the NICU at Texas Children’s Hospital Pavilion for Women.

Vincent’s mother, Norma Garza, said Santa’s visit meant so much to her, giving her a sense of joy, relief and normalcy during what was a longer stay at the hospital than expected.

“Everyone here has been so great,” she said. “Having Santa come by made it even better.”

Vincent and Norma got an equally as good surprise later that day – clearance from Vincent’s doctor to go home! The infant was discharged on December 12, just in time to spend the holidays at home with his family.

Stephanie Jones, a Texas Children’s employee, delivered her son, Levi, on October 8. He has been in the NICU at the Pavilion for Women ever since and might not be discharged by the end of the month. So, having Santa personally visit the infant was super special.

“Being here in general is hard,” Jones said. “A surprise visit like this helps bring peace of mind and a little bit of normalcy to our day.”

The visit from Santa was hosted by the hospital’s Newborn Center Family Advisory Committee and First Memories Texas, a volunteer group that helps families with babies in the NICU and CVICU at Texas Children’s to make memories and tell their children’s stories through photography.