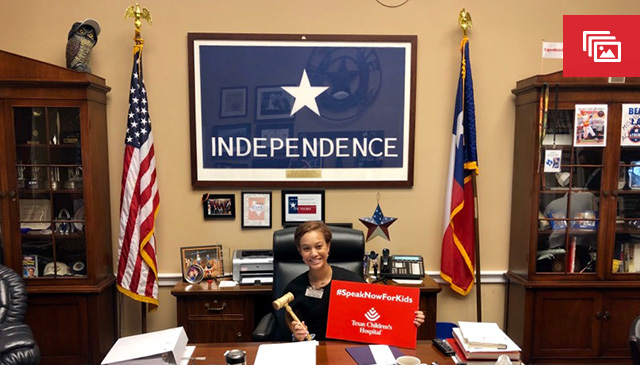 The vibrant 14-year-old met with a handful of Texas lawmakers, including former Congressman Gene Green and Representatives Michael McCaul and Dan Crenshaw. She hopes her voice brings change and increased investment in pediatric cancer research.

Family Advocacy Day, hosted by the Children’s Hospital Association (CHA), was focused on ensuring that a federally-funded pediatrician training program receives an increase in financial support, among other issues.

According to CHA, the hospitals that receive Children’s Hospitals Graduate Medical Education (CHGME) train approximately half of the nation’s pediatricians. Texas Children’s is one of those hospitals.

A Young Advocate in the Making

Eden’s story is one we can all be proud of. In 2015 at just 10 years old, she was diagnosed with a rare tumor – so rare it still doesn’t have a name. It had spread throughout her body. An individualized treatment plan was drafted by the Rare Tumors and Neuroblastoma Programs at Texas Children’s Cancer Center, which included many rounds of chemotherapy and hip surgery.

Eden was cancer free for nearly two years when she relapsed in June 2018. Thanks to funding by Alex’s Lemonade Stand Foundation (ALSF), Eden had the opportunity to participate in a novel clinical trial at Texas Children’s Cancer Center for pediatric patients with relapsed disease that allowed her to go into remission for the second time.

Dr. Jennifer Foster, who is Eden’s pediatric oncologist at Texas Children’s, couldn’t be prouder of her patient’s trip to D.C. Foster said she often urges patients and medical professionals to get involved in the legislative process.

“As medical professionals, we can all advocate at a patient level, but we won’t experience any real change on a global level until we tap into the policy side of health care,” Foster said. “There is so much we can do as pediatricians and getting involved in the political process is part of that.”

Foster goes on to say that everyone can help the cause in their own way.

“Eden is an incredibly dynamic individual – truly someone who lights up a room when she walks in. Speaking out and interacting with people is one of her gifts and she’s using it to give back to Texas Children’s.”

You can also help.

Texas Children’s is a hospital that receives CHGME funding. You can help the cause! Let your voice be heard, here: https://actnow.io/m8pHocn