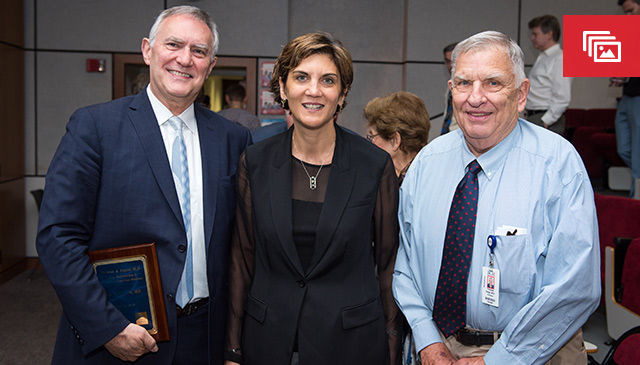 The Department of Critical Care celebrated the remarkable legacy of Dr. Thomas Vargo during Pediatric Ground Rounds on May 24.

Texas Children’s founded the Thomas A. Vargo Visiting Professorship in honor of Vargo’s service as the first chief of Pediatric Critical Care Medicine and the first full-time medical director of Texas Children’s pediatric intensive care unit (PICU), a position he accepted in 1979 at the personal request of legendary Physician-in-Chief, Dr. Ralph D. Feigin.

“The Visiting Professorship is a wonderful opportunity for us to honor Dr. Vargo and his great contributions to Critical Care and Cardiology at Texas Children’s and at the same time learn from and interact with the top experts in the field of pediatric critical care,” said Texas Children’s Chief of Critical Care Dr. Lara Shekerdemian. “I can only imagine what an undertaking it was to build a program at a time when pediatric intensive care was in its infancy and none of the resources we have today – human, technology or equipment – were available. Despite these challenges, Dr. Vargo persevered and laid the foundation for the wonderful service we are part of today.”

This year’s Visiting Professor was Dr. Peter Laussen, Chief of the Department of Critical Care Medicine at the Hospital for Sick Children (SickKids) in Toronto, Professor of Anaesthesia at the University of Toronto, the David and Stacey Cynamon Chair in Critical Medicine, and a globally recognized authority on cardiac critical care.

Over the past decade, Laussen has focused on systems and human engineering applied to critical care, and is the lead developer of a web-based data visualization platform that stores ICU data collected in real time from multiple sources, such as patient monitors, ventilators and lab systems. That data is then seamlessly synthesized in a manner that reduces the impact of human error in ICU decision-making processes.

In his presentation, “Boosting Signals and Seeing Patterns: Artificial Intelligence and Critical Care,” Laussen described the changing landscape of critical care medicine over the past 40 years. He also discussed the increasingly important relationship between critical care and technology, and specifically addressed the potential advantages of artificial intelligence and data science in critical care.

Technology and data utilization are already crucial aspects of care at Texas Children’s. Ultimately, we hope to have the ability to use sophisticated data platforms as decision support tools to enhance patient care and even to predict imminent deterioration.

Another example of how we’re using data is in Texas Children’s Mission Control, where we have real-time tracking of our transport ambulances and plane. That simple ability lets us better estimate ETAs and redirect teams for emergencies. Our teams also have access to real-time census data that allows them to know our bed capacity and how best to direct patients to the closest ICU.

A recent scenario when this technology made a lifesaving difference happened in August 2018. Mission Control received a call from a surgery center north of Houston, where a child suffered a lacerated carotid artery during a routine outpatient procedure. The Kangaroo Crew team at Texas Children’s Hospital The Woodlands was dispatched to the patient, while a second team was sent from the Texas Medical Center with emergency blood. Mission Control coordinated a precise meeting between the two teams to hand off the blood and was in constant communication with our emergency center, ENT surgeons and others to meet the child on arrival. Prior to launching Mission Control, with its sophisticated technology and communication tools, this would not have been possible.

About Dr. Thomas A. Vargo

Dr. Tom Vargo was born and grew up in Los Angeles, California. He received his bachelor’s degree from George Pepperdine College and his medical degree from UCLA. He trained in pediatrics in Madison, Wisconsin, where he met his wife, Connie. The two have been married since 1964 and have three children.

After spending two years in the United States Air Force in Florida, Vargo joined Baylor College of Medicine and Texas Children’s in 1968 to train in Cardiology with Drs. Dan McNamara and Denton Cooley. Vargo has remained in Houston since, serving as a professor of Pediatrics at Baylor. In that time, he laid the foundation for Texas Children’s world-class Critical Care service, which now has 80 attending physicians, 40 advanced practice providers, 10 physician instructors and 20 fellows, admitting more than 7,000 patients annually to the critical care units at our Texas Medical Center campus, West Campus and Texas Children’s Hospital The Woodlands.

The highlight of Vargo’s career has been the education and training of students and residents. He has been a long-time member and chair of various medical school student and resident physician advisory committees. His lectures were always popular with the medical students and he has mentored numerous fellows and faculty. For more than 40 years, he has been the training program director of four different residency programs at Baylor – in pediatrics, pediatric cardiology, critical care medicine and the post-graduate year 1 residency. Vargo was a founding member and president of the Society of Pediatric Cardiology Training Program Directors. He has received multiple teaching awards from medical students and residents at Baylor, including the Pediatrics Department’s lifetime teaching award.