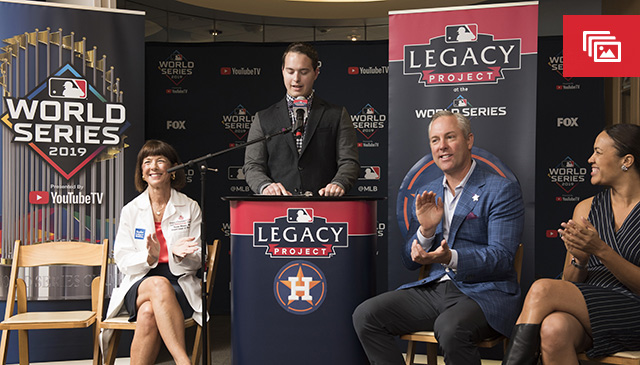 When Lance McLean was diagnosed with acute lymphoblastic leukemia (ALL) a little over a year ago his world as he knew it stopped.

The 18-year-old football fanatic was told he had to quit the sport he loved and that he would never play it again. He also was told he would miss much of his junior year of high school, including homecoming.

McLean said he’s traded hanging out with friends and playing football for getting chemotherapy and going to doctor appointments. A portion of his time is dedicated to sitting in the waiting room at Texas Children’s Cancer and Hematology Centers, a place that’s packed with entertainment for young children but lacks an area where teenagers can hang out and relax.

“I love seeing kids watch shows like Doc McStuffins, but I’ve kind of grown out of that,” McLean joked. “I would love to have any area where I can sit back, relax and play video games.”

Melanie LeGrande, vice president of Social Responsibility for MLB, said the organization’s gift of $25,000 was part of the its inaugural “Fall Classic Legacy Initiative,” which provided funding for community enrichment projects to both the Houston Astros and Washington Nationals in recognition of each Club advancing to the 2019 World Series. The effort is an extension of the longstanding All-Star Legacy Initiative, which has contributed more than $90 million to enrichment projects in All-Star host communities since 1997.

Reid Ryan, president of business operations for the Houston Astros, said he is confident the $25,000 gift from MLB and the additional $25,000 from the Astros Foundation will go toward creating a wonderful space for patients like Lance.

“Baseball brings community together and that is what is happening here today,” Ryan said. “I’m excited to see the space come together.”

Texas Children’s Cancer and Hematology Centers Director Dr. Susan Blaney said as one of the largest pediatric Cancer and Hematology Centers in the country, we treat many teenage patients every year from across the country, and that the centers’ staff is dedicated to treating the entire patient, which includes meeting them where they are in their journey.

“By creating this teen waiting area, MLB and the Astros Foundation are helping provide a space where our teen patients can retreat and participate in age-appropriate activities centered on their interests,” Blaney said. “We can’t even begin to tell you how much this will mean to them and their families.”