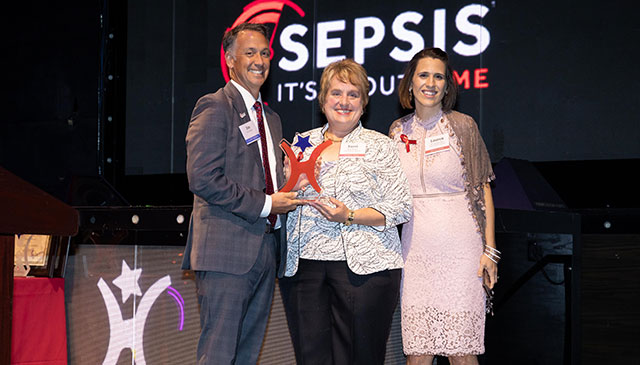 Texas Children’s Hospital was recently honored with the 2019 Sepsis Heroes Award presented by the Sepsis Alliance at the organization’s eighth annual Sepsis Heroes gala on September 12.

Sepsis Alliance, the nation’s leading sepsis organization, recognized Texas Children’s for its continued support and instrumental efforts in raising sepsis awareness and improving treatment for sepsis – the body’s life-threatening response to infection that affects 1.7 million children and adults each year.

‘We are incredibly honored to receive this prestigious award in recognition of our efforts on sepsis quality improvement initiatives at Texas Children’s,” said Dr. Lauren Hess, director of Simulation for Pediatric Hospital Medicine. “Our continued investment in innovative processes, decision support and analytics has helped our care teams across the organization significantly improve pediatric sepsis care and outcomes.”

During the awards gala, Sepsis Alliance recognized Texas Children’s for several notable achievements, including the successful development and implementation of a pediatric sepsis algorithm to improve the timely diagnosis of sepsis. The computerized algorithm records data such as a patient’s heart rate, blood pressure, skin appearance, temperature, respiratory rate, and other risk factors like diagnosis and/or high-risk medical treatment like chemotherapy, to calculate a risk score and generate a sepsis alert.

“The algorithm automatically calculates the sepsis score each time a patient’s chart is opened or a pertinent data element is filed,” said Texas Children’s Quality Safety Specialist Terri Brown. “If the sepsis score reaches eight or higher, the score is pushed to clinicians in the form of an alert, leading to the early detection and timely care of sepsis, which significantly improves a patient’s chance of recovery.”

Click here to read an article about Texas Children’s sepsis algorithm and the collaboration that went into creating and implementing this electronic screening tool which was featured in the journal Health Affairs.

Texas Children’s was also the recipient of a Health Catalyst award for data utilization at the 2019 HAS conference and a finalist for the clinical achievement award in recognition of our sepsis quality improvement efforts.

Since improving access to meaningful data and analytics among clinicians and staff is key to improving patient care and outcomes, Texas Children’s established the structural foundation to make this possible, and to ensure timely, accurate data drives new care interventions for the treatment of pediatric sepsis.