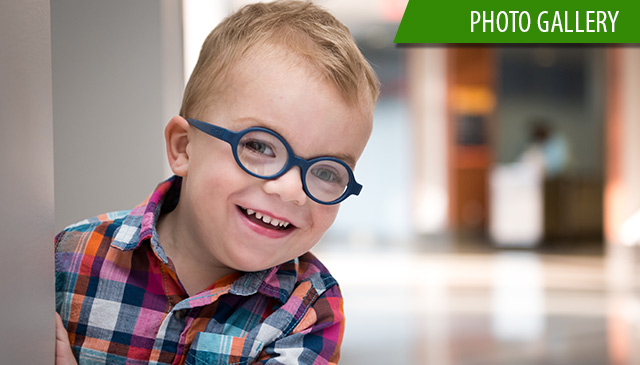 “I just thought he was a serious child,” said Wade’s mom, Katie Davis. “I didn’t think there was anything physically wrong with him.”

But there was, and Katie quickly learned after a trip to the emergency room that Wade had a rare form of cancer in both of his eyes. Called retinoblastoma, the cancer begins in the back of the eye and is most commonly found in young children. Only 300 cases are diagnosed in the United States each year.

To get the best care, Wade and his family traveled from their home in Lacassine, Louisiana, to the Texas Medical Center where they met with members of the Retinoblastoma Center of Houston, the only center of its kind in the southwest United States.

Created a decade ago, the center combines expertise from Texas Children’s Cancer Center, the Children’s Cancer Hospital at The University of Texas MD Anderson Cancer Center, Houston Methodist Hospital and Baylor College of Medicine. Together these specialists pioneer advancements in treating and curing retinoblastoma through ground-breaking research and the development of innovative therapies.

Depending on the kind and stage of retinoblastoma, the team offers treatments such as intra-arterial chemotherapy, intravitreal chemotherapy, systemic chemotherapy, laser therapy, cryotherapy, enucleation, proton beam radiation therapy, and brachytherapy. In children with widely metastatic disease, the center offers therapies such as autologous stem cell transplant.

“No other program of this type has the level of multidisciplinary expertise that we have at the Retinoblastoma Center of Houston,” said Dr. Murali Chintagumpala, clinical co-director of the center, pediatric oncologist at Texas Children’s Cancer Center and professor of pediatrics at Baylor College of Medicine. “We are on the cutting edge of research performing important clinical trials that incorporate innovate treatment options such as intra-arterial, intravitreal and proton radiation therapy.”

For Wade, and other children like him, the center and its experts saved and changed his life. Dr. Dan Gombos, clinical co-director of the Retinoblastoma Center of Houston and ocular oncologist for the Children’s Cancer Hospital at The University of Texas M. D. Anderson Cancer Center, and Dr. Frank Lin, a member of the center, a pediatric oncologist at Texas Children’s Cancer Center and Assistant Professor in the Department of Pediatrics, Section of Hematology/Oncology, at Baylor College of Medicine, were his primary physicians.

Working together with the rest of the center’s team, Gombos and Lin devised a comprehensive treatment plan for Wade that included surgery, multiple rounds of chemotherapy, cryotherapy and laser therapy. Fortunately, the vision in his right eye was saved and his cancer has been eradicated, allowing him to blossom into a feisty, full-of-life little boy.

“We are so thankful for what these doctors have done for our son,” Katie Davis said. “Everyone has been absolutely incredible.”

Lin said it’s a privilege to be able to work with patients like Wade and to be celebrating 10 years of partnership with other members of the Retinoblastoma Center of Houston.

“Our goal, beyond curing this disease, is to use the least invasive treatment necessary to save the child’s life, and when possible, their eye and their vision,” Lin said. “With the Retinoblastoma Center of Houston, our patients meet world class specialists focused on both their immediate oncology treatment as well as long-term follow-up so that they can thrive in the future. The center also provides them invaluable information about the genetics of their tumor and the risk to future siblings or ultimately their own children so that monitoring for early detection can be performed.”

The center currently is focusing its research on more effective ways of delivering therapy locally to the affected eyes while minimizing the side effects on the rest of the body. The center is also studying the mechanisms that spread the disease beyond the eye in children with retinoblastoma with the goal of developing treatments for this complication of the disease.

To learn more, visit the Retinoblastoma Center of Houston’s Website at rbhouston.org.