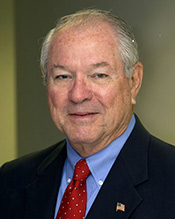 Dr. Charles Kenneth (Ken) Landrum, founder of the Vannie E. Cook Jr. Children’s Cancer and Hematology Clinic in McAllen, Texas, died surrounded by loved ones on February 22 at the age of 91.

A native of Kingsville, Dr. Landrum was born on November 3, 1929 to William Miles Landrum and Ruth Pfannkuche Landrum. He attended Texas A & M University, earning a B.S. in biology in 1950. While at A&M, Dr. Landrum was a member of the Corps of Cadets and the Ross Volunteers, and he served as Company Commander of E Air Force. Upon graduation, he was commissioned as a 2nd Lt. in the USAF Reserve.

Dr. Landrum received his medical degree in 1954 from Baylor College of Medicine and completed his residency in Obstetrics and Gynecology at Baylor in 1957. He went on to serve as the Chief of the Department of OB-Gyn at Hunter AFB, Georgia, receiving an Air Force Commendation Medal for Meritorious Service in 1959. After another year in Houston working at Jefferson Davis Hospital, he and his family moved to San Angelo, Texas. He practiced at San Angelo Medical and Surgical Clinic until the end of 1963, when they returned to South Texas. Dr. Landrum was in the private practice of Obstetrics and Gynecology in McAllen for the next thirty years, retiring in 1994. He and Dr. Dan Chester founded Landrum-Chester OB-Gyn Associates in 1966.

A lifelong contributor to his profession and his community, Dr. Landrum was a member of the McAllen ISD School Board, The Texas Association of OB-Gyn, the American Cancer Society, the Hidalgo-Starr Counties Medical Society, McAllen Country Club, and the Tower Club, serving as President/Chairman of all of those organizations. He also served as the Founding Medical Director and Chief of Staff of Rio Grande Regional Hospital. At the age of 86, he was honored to receive the Distinguished Alumnus Award from Baylor Medical School for his lifetime of service.

In 1998, Dr. Landrum took on his most ambitious volunteer commitment, that of Chairman of the Board of the Vannie Cook Cancer Foundation. He was a driving force in obtaining an agreement with Baylor College of Medicine and Texas Children’s Hospital in 2000 to operate a first-class Pediatric Hematology and Oncology Clinic in facilities owned by the Cook Cancer Foundation. The clinic continues to help children in the Rio Grande Valley today, providing services for those with cancer and blood disorders.

“I was deeply saddened to learn of Dr. Landrum’s passing. He was a highly respected, passionate, and visionary community leader who positively impacted the lives of countless children with cancer and blood disorders through his development and unwavering support of the Vannie Cook Clinic in McAllen, Texas over the past 20 years,” said Dr. Susan Blaney, Director, Texas Children’s Cancer and Hematology Center and Service Chief, Hematology/Oncology.

Contributions in Dr. Landrum’s memory may be made to the Vannie Cook Cancer Foundation (vanniecook.org), First United Methodist Church – McAllen (fumcmcallen.com), Snack Pak 4 Kids – San Antonio (SP4KSA.org) or to the charity of your choice.