The following story was published in the Houston Chronicle and highlights a study conducted by Texas Children’s Critical Care Specialist Dr. Mubbasheer Ahmed and other researchers across the United States. The study looks at the long-term effects of multi-system inflammatory syndrome (MIS-C), a condition seen in a small number of children who have had COVID-19. 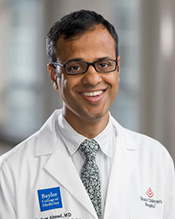 The inflammatory condition in children caused by a delayed effect of the coronavirus likely will require lifelong monitoring in some cases because of injury it can inflict to the patient’s cardiovascular system, according to a Houston-led study.

In a review of U.S. and European patients, Texas Children’s Hospital researchers found that though the vast majority of kids survive the dangerous syndrome that strikes without warning three or four weeks after asymptomatic infections, some suffer lasting tissue damage from its characteristic inflammation.

“Our review shows that this condition is more severe than the virus itself, affecting the whole body,” said Dr. Mubbasheer Ahmed, a Texas Children’s critical care specialist and the study’s lead investigator. “That’s indicated by its concerning rate of hospitalization, use of mechanical ventilation and death. That’s why some patients will require close watching over time.”

The study found nearly three-quarters of children with multi-system inflammatory syndrome (MIS-C) were admitted to the intensive care unit and 22 percent required a ventilator. A little less than 2 percent died. By contrast, the vast majority of pediatric COVID-19 cases are usually fairly mild. The latest numbers show 10 U.S. children have died from the disease, compared to nearly 190,000 adults.

MIS-C is considered quite rare, though there are few official numbers at this point, nearly four months after the Centers for Disease Control and Prevention began recognizing the condition as associated with the coronavirus. It can rapidly lead to medical emergencies such as insufficient blood flow around the body, a condition known as shock.

The study did not address the prevalence of MIS-C.

The study – published Friday in EClinicalMedicine, a journal of The Lancet – looked at 662 MIS-C cases reported from January to July, none at Texas Children’s. The Houston hospital has treated about three dozen such patients during the pandemic, many of which cases will be published in the near future, Ahmed said.

MIS-C is similar to another rare pediatric illness called Kawasaki disease, which causes the patient’s blood vessels to become inflamed. That condition usually resolves in days to weeks, though it is a common cause of acquired heart disease in children.

Ahmed said one reason that MIS-C first drew attention was because the cases were similar to Kawasaki and responded well to the therapies used for that disease. He added that it is because Kawasaki patients tend to require long-term follow-up that pediatricians believe the same will be true for some MIS-C patients.

Ahmed also noted that the new study found one key distinction between the two diseases – age. MIS-C affects kids older than 5, according to the study. Kawasaki affects those under 5.

Dr. Alvaro Moreira, a neonatologist at the University of Texas Health Science Center at San Antonio who also participated in the research, noted the condition was initially challenging for clinicians because it “has so many different faces,” affecting the heart and lungs, neurological system and gastrointestinal system.

Moreira noted that the amount of inflammation in MIS-C is greater than in Kawasaki and toxic shock syndrome. He also said MIS-C cases involving a coronary aneurysm, localized stretching or ballooning of a blood vessel, will put the patient most at risk of future issues. Ten percent of children in the study had such stretching.

“These are children who are going to require significant observation and follow-up with multiple ultrasounds to see if it’s going to resolve or is something they’ll have for the rest of the lives,” said Moreira.

The condition affects both healthy children and those with an underlying medical condition. In the latter group, half were obese or overweight.

Ahmed downplayed the significance of the study findings on the debate about when to resume in-person learning in schools, emphasizing that their successful reopening will be contingent on virus containment and the limitation of spread. But he acknowledged the more there is spread, the higher the likelihood there will be of more children developing MIS-C.

Researchers at Georgetown, the University of Pennsylvania and the National Institutes of Health also contributed to the study.