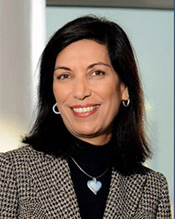 Dr. Huda Zoghbi, director of the Jan and Dan Duncan Neurological Research Institute at Texas Children’s, has been featured in Spectrum, a leading news and opinion source on autism.

Zoghbi, who is particularly well-known for her discovery of generic roots of the autism-related Rett syndrome, was profiled in a June 25 article. The article showcases her many career highlights, from a Breakthrough Prize award in 2017 and a Brain Prize last year, to her story of beginning her medical education during the Lebanese Civil War.

The Lebanese-born American geneticist received her post-doctoral fellowship at Baylor College of Medicine in 1985. A child she treated at Texas Children’s Hospital eventually snowballed into an interest in the then-unknown Rett syndrome.

Rett syndrome, first prescribed in 1966, was not well-known in the United States until a Swedish pediatrician published an English article in 1983, and then when Zoghbi began to research the condition.

The genetic mutation, found almost exclusively in girls, causes a span of symptoms and complications including seizures, sleeping problems and more. When Zoghbi and her colleagues began to publish papers on the syndrome, families from across the country began to come to Texas Children’s for help.

Zoghbi is still in contact with that first Texas Children’s patient, according to the Spectrum article. The patient, Ashley Fry, is now 41 years old, and Zoghbi keeps a photo of her in her office.

The Duncan NRI at Texas Children’s receives more than $15 million in research support annually, and has discovered or co-discovered more than 40 disease-causing genetic mutations.