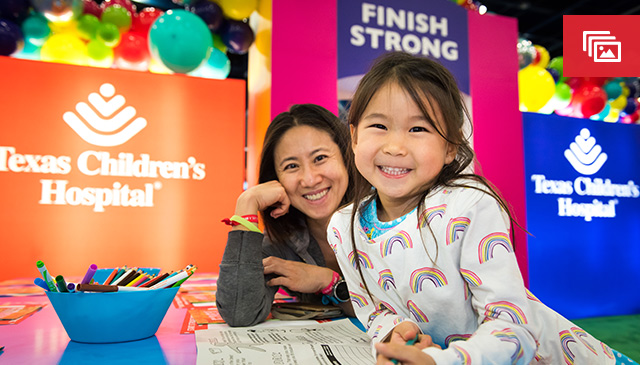 Texas Children’s helped push almost 200 runners across the finish line of the Houston Marathon and Half Marathon January 19 in front of the George R. Brown Convention Center. As part of the Texas Children’s Running Team, the runners signed up for the 26.2 mile or 13.1 mile race not only to hit the pavement but to raise money for a good cause – Texas Children’s.

This is the fifth year Texas Children’s Hospital has been an official charity for the Houston Marathon and Armaco Half Marathon Run for a Reason program, giving people a way to participate in the race of their choice with a guaranteed entry – on behalf of a charity.

This was the second year Texas Children’s Hospital had the privilege of being the co-presenting sponsor of the Houston Marathon Health & Fitness EXPO alongside Houston Methodist. Held prior to Chevron Houston Marathon and Aramco Houston Half Marathon, the EXPO was attended by race participants and others are invited to come to interact with other runners and make purchases from a variety of vendors. View photos from the event below.

Texas Children’s Hospital will be the co-presenting sponsor of the Houston Marathon Health & Fitness EXPO next year and is an official 2021 Charity and registrations for next year are open. Runners who commit to fundraise $750 for Texas Children’s Hospital will have their registration fee waived and will receive guaranteed entry for the Full or Half Marathon. Runners, or walkers, also can participate as a Hero Runner, making a one-time tax-deductible donation of at least $350, plus the cost of registration. To learn more and register to run for Texas Children’s in 2021, click here. In addition, members of the Employee Health & Wellness team will be hosting workshops for Texas Children’s employees participating in Run for a Reason to help them prepare and train for the half or full marathon. More information will be available soon. 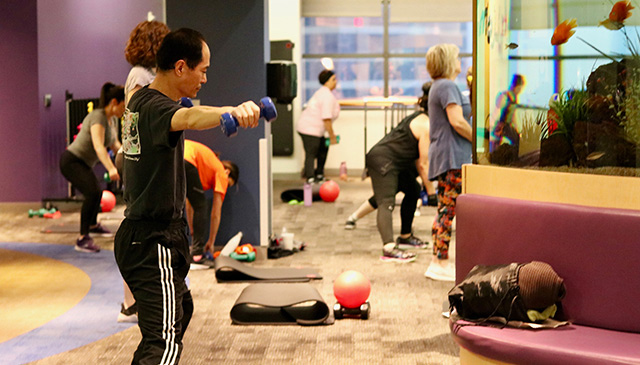 The arrival of a new year is an ideal opportunity to refresh and refocus on achieving our professional and personal goals. If improving yourself in mind, body and spirit is among your resolutions for 2020, Employee Health and Well-Being is here to support you on your journey.

Resolution: Start a new health and fitness routine.
Amplify unity with your co-workers by taking a group fitness class. Take a look at the new schedule on Connect, which includes on-site classes available at the Well-Being Studio, Health Plan, West Campus and The Woodlands. All Texas Children’s employees, and Baylor employees who work at Texas Children’s locations, can participate in any class at any location, at no cost. If you live or work outside of Houston, please remember that you are eligible to receive reduced monthly membership rates, waived enrollment fees and discounted services from our well-being partners, including ClassPass, WW (Weight Watchers) and more.

Resolution: Practice self-care.
Take advantage of EAP Plus, the enhanced Employee Assistance Program available to all employees and eligible dependents. In addition to round-the-clock access to counseling services by phone, and referrals to qualified mental health providers in the community, EAP Plus provides legal guidance, financial information and unlimited work-life solutions to help you take care of tasks like planning a party, securing child or elder care, arranging home repairs and more. Call 833.EAP.PLUS 24 hours a day, seven days a week, to connect with a certified counselor, or visit the program online and enter EAPPLUS as the Organization ID.

Resolution: Be more intentional about taking care of your overall health.
Now is a good time to schedule an annual physical with your health care provider. Texas Children’s Employee Medical Clinic provides full-service primary care that includes annual physicals and the well-being physical, which offers a more in-depth and comprehensive approach to understanding your key health numbers. Click here to view Employee Medical Clinic locations and hours of operation, and call 832-824-2424 to make an appointment.

As you set your sights on becoming a healthier and stronger you in the New Year, your Employee Health and Well-Being team is here to empower you every step of the way. Together, let’s make it a great year.

It’s time to lace up your sneakers and hit the pavement! Texas Children’s Hospital and the Houston Marathon Foundation are teaming up again to host the West Campus Family Fun Run and The Woodlands Family Fun Run in April and May. Registration is open for both runs and spots are filling up fast. So, sign up today to guarantee a space for you and your family.

West Campus will host the eighth annual West Campus Family Fun Run at its campus on Saturday, April 4 with a 9 a.m. start time. The event will include both a 1K and 3K course. Following the run/walk, families can enjoy various activities until noon at the Family Fun Zone.

The entry fee for the run/walk is $8 per person. All attendees must register (even infants). Strollers, walkers and wheelchairs are welcome. Children may not participate unattended.

Registration for the West Campus Family Fun Run will close at 5 p.m. Monday, March 23. Click here to register and learn more about the upcoming event.

Texas Children’s Hospital The Woodlands will host its fourth annual Family Fun Run event on Saturday, May 2. The event will offer a 1-mile course and will begin at 9 a.m. Post-race activities will follow until 11 a.m. at the Family Fun Zone.

The entry fee for the run/walk is $8 per person. All attendees must register (even infants). Strollers, walkers and wheelchairs are welcome. Children may not participate unattended.

Registration for The Woodlands Family Fun Run will close at 5 p.m. Monday, April 20. Click here to register and learn more about the upcoming event.

Participants – including those who need walkers and wheelchairs – are welcome at both Texas Children’s Family Fun Run events. There will not be prizes given to top finishers as all participants will receive an award for taking part in an event designed to educate and encourage Houston-area families to adopt active, healthy lifestyles. Families must participate together. Children are not allowed to run unsupervised or on their own. Please ensure all participants are registered, even small children in strollers. Once registered, plan to attend one of the Packet Pick-Ups in advance of the event to pick up your event T-shirts, bibs, goodie bags and more. 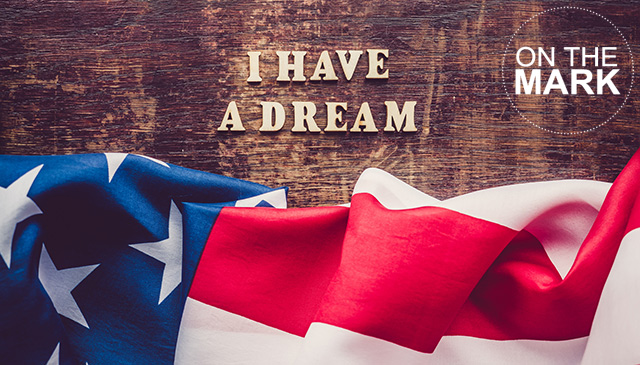 As we celebrate the life of Dr. Martin Luther King, Mr. Wallace’s latest blog post reminds us that King was a champion for the equal rights of ALL Americans. Read more 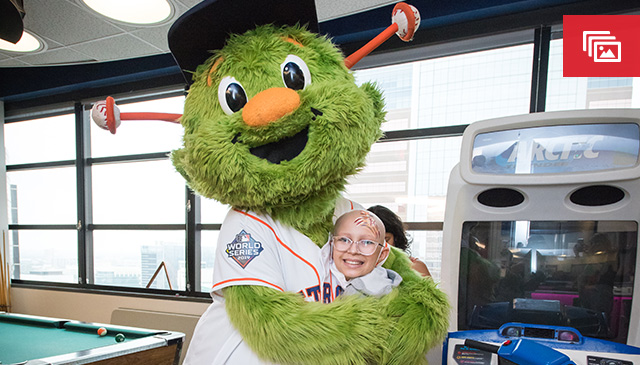 Patients with Texas Children’s Cancer and Hematology Centers got the surprise of a lifetime last week when Houston Astros players José Altuve, Joe Biagini, Dustin Garneau and Myles Straw, as well as Orbit, the team’s mascot, paid them a visit in The Zone and in some of their hospital rooms.

The visit was part of the Houston Astros Caravan, a yearly event that occurs prior to the onset of spring training to pump up fans for the upcoming season. Organized by the Astros Foundation, this year’s caravan kicked off January 13 and ended January 16 with stops in cities across Texas.

“We are delighted that Texas Children’s is one of our stops,” said Twila Carter, executive director of the foundation. “Our largest audience is kids and we are grateful to be able to provide them with an opportunity to have some fun.”

For more than an hour Altuve, Biagini, Garneau, Straw and Orbit hugged, high-fived, visited with and took selfies with patients and families awaiting treatment or appointments in the Cancer and Hematology Centers. The players also signed autographs and participated in arts and crafts with the children and families.

“My friend is going to flip out when I tell her I got Altuve’s autograph for her,” said Jane Lange as she watched the baseball player shoot pool with another patient. “She is going to be so happy!”

Shayne Pederson said the players’ visit to his son Brock’s hospital room in the Cancer Center was a much-needed distraction from what has been several days of surgeries and doctor’s appointments. The players spent about 15 minutes talking with Brock and his family. They also signed autographs and snapped several photos.

“I haven’t seen him (Brock) smile like that in a while,” said Amye Pederson, Brock’s mother. “This has been really awesome.”

Dr. Susan Blaney, director of Texas Children’s Cancer and Hematology Centers, attended the event and said respites such as these are greatly appreciated.

“Our patients, families and staff work hard each and every day to combat cancer,” Blaney said. “Adding some fun to that hard work is always a bonus, and we are thankful that the Astros provided that opportunity.”

The Astros will start their new season March 26 at home against the Los Angeles Angels. 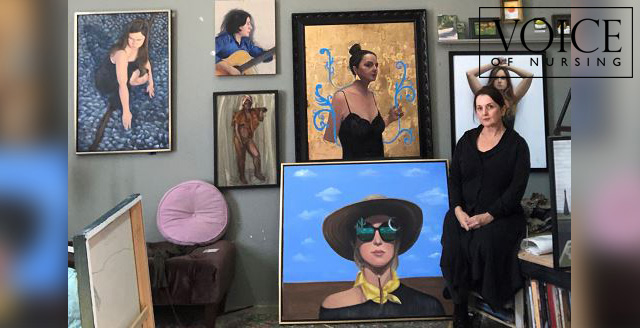 Rhonda Lanclos shares how spending time on enjoyable hobbies, like art, has helped enhance her health and well-being so she can better care for her patients and their families at Texas Children’s. Read more 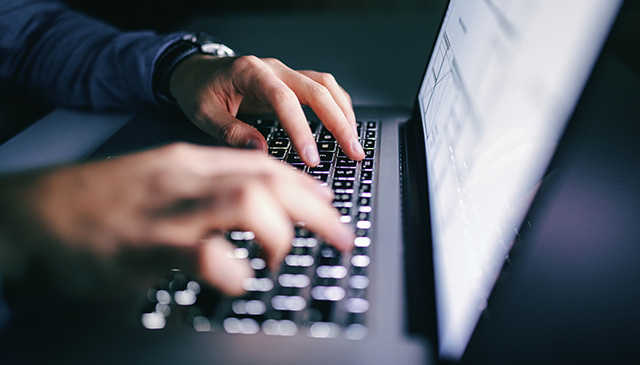 With the current geopolitical conditions and the escalating situation between the US and Iran, we are asking you to heighten your security vigilance.

Practice extreme caution when clicking on links and opening attachments within external emails. This level of vigilance should be practiced while accessing your personal email accounts, as well.

Our IS teams are taking the necessary proactive steps to better position our ability to timely respond to cyber threats. Our number one priority is the safety of our patients, faculty, and staff, and we are therefore heightening the security measures we have in place to combat potential risks to the best of our ability.

Thank you for helping us safeguard Texas Children’s.